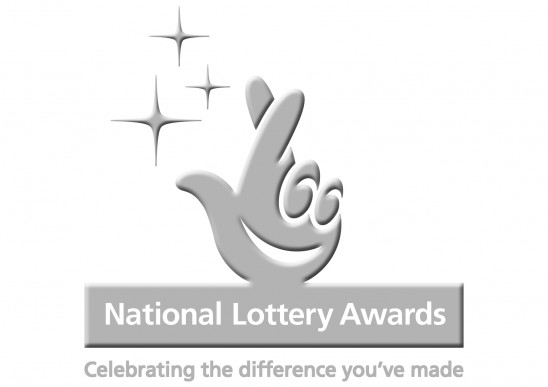 We are delighted to tell you that Humshaugh Village Shop is in the semi-finals of the National Lottery Awards 2011 and we need your votes to win. We are one of ten voluntary/charity groups in the UK wide competition. There are six other sections for Sport, the Arts, Heritage, Health, Environment and Education. From Tuesday May 31 you have just three weeks to vote for us. This vote will produce 3 finalists and then a second vote later in the year will decide the winner. The winner in each category will be announced on a special, live BBC One programme in the autumn. Not only will there be a trophy there will also be a £2,000 cash prize.

The first round of voting starts at 9.00am on Tuesday May 31 and runs until midday on Tuesday June 20. Any votes outside those times will not count and you may still be charged. Vote for Humshaugh Village Shop by clicking here: www.lotterygoodcauses.org.uk/awards . If any of your friends and family can’t vote on-line, ask them to vote for us by ringing 0844 836 9732. Calls cost 5p from a BT land line but will be dearer on other networks or mobiles. Votes outside the times and dates mentioned will not be counted but you could still be charged.

Despite winning a prestigious regional award from the Countrywide Alliance, your local shop couldn’t come away with the top prize at the 2010 National Awards at the House of Lords. Humshaugh, which had won Best Village Store/Post Office in the North East was up against 11 other stores from around Britain. The worthy winner was Yarpole Community Shop Association and Post Office, Yarpole, Leominster, Herefordshire. You can find out more on the Countryside Alliance’s website. 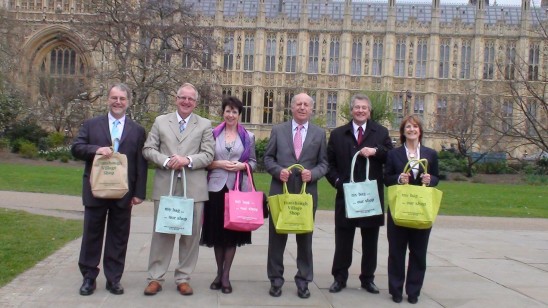 Three of the nine Humshaugh directors, Dick Moules, Steve Robins and Brian Earl along with three volunteers, Jennifer Hewitt, Jimmy Duncan and Margaret Earl, travelled to London for the ceremony. It was held on the terrace next to the Thames and guests included TV chef and countrywoman Clarissa Dickson-Wright and the Duke of Devonshire and the Dowager Duchess from Chatsworth. Afterwards the Humshaugh team was treated to a guided tour of the Palace of Westminster by Hexham’s MP Guy Opperman. See the Bag Shot Gallery for a couple more photos. 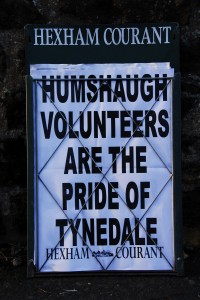 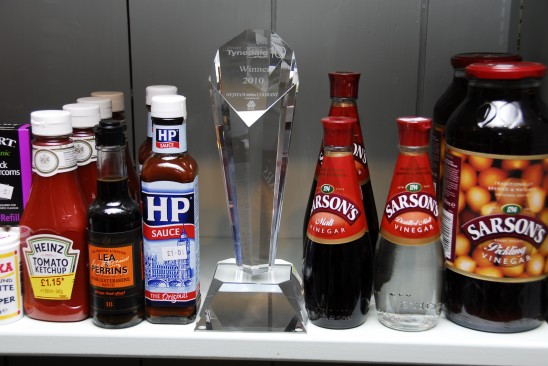 The Shop is really puffed up with pride after winning not one but two Pride in Tynedale Awards. At a special ceremony at Hexham Racecourse on Friday March 25th Humshaugh Community Ventures Limited won the Community Award (pictured below) and the prestigious main Pride in Tynedale Award (above). The 2010 awards, organised by the Hexham Courant, should have taken place in December but the event was postponed because of the severe winter weather.

In the community category HCVL beat fellow finalists Prudhoe Gardeners’ Association and the Hearth Arts Centre at Horsley. To win the overall award Humshaugh Community Ventures were up against the winners of the retail category: Wheelbirks Farm near Stocksfield; Hexham Community Partnership, who’d won the Tourism Award, and Young Business Award winner Rachel Lawson, owner of ‘What a Clip’, in Prudhoe.

Here’s what the Editor of the Courant, Colin Tapping, said when he announced the winner of the overall award: “Choosing one outstanding candidate from the winners of the four categories is a difficult task. In each of them, Tynedale can indeed be very proud. All of them are fine examples that other like-minded groups and individuals others will do well to follow.

“The overall winners have a heart-warming tale to tell. They have shown a steely determination to overcome adversity and safeguard something which is very dear to their heart.

“Their achievements have adorned the pages of the Hexham Courant, caught the eye of the regional and national media, and even grabbed the attention of the international community.

“They have hosted fact-finding visits by delegations from as far afield as Estonia, Norway and Sweden – all anxious to learn first-hand about their tremendous success story.

“They have helped save a pub; they have saved a shop from closure; and they have demonstrated the irresistible force of community spirit.

“Today they’ll have to find space on those shop shelves for a second trophy.  The overall winner of the Pride In Tynedale Award is Humshaugh Community Ventures.”

The awards were collected by HCVL directors Brian Earl, Maurice Gilmour and Sally Curry. See the Courant’s report and picture here or check out the video and photo gallery of the event.

On Wednesday March 30th three directors and three volunteers traveled to to the House of Lords for the national finals of the Countryside Alliance Awards. The shop was the North East winner in the Village Shop/Post Office category but was up against 11 other stores from across Britain and didn’t come away with a national trophy. See the post Not Quite Top Shop for the story and pictures. 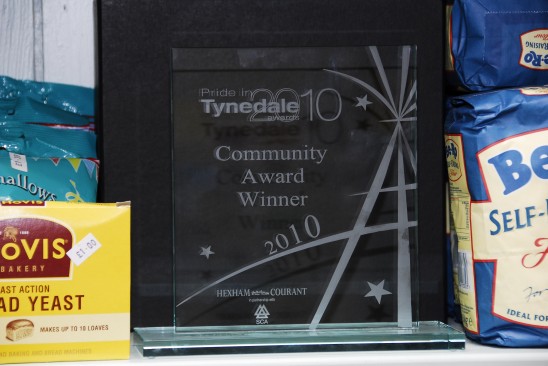 World Book Night comes to Humshaugh Village Shop on Saturday March 5th. And it’s doubled in size now that two villagers chosen as givers have decided to pool their resources and give away a total of 96 books. Sally Curry will be giving away 48 copies of “A Fine Balance” by Rohinton Mistry and Richard Hewitt will be handing out 48 copies of “The Curious Incident of the Dog in the Night-Time” by Mark Haddon. Click on the titles to find out more about the books. The shop will be open from 4pm to 7pm so that villagers can pop in for a chat, a drink, some nibbles and a free book. The plan is that once you’ve read, and hopefully enjoyed your book, you’ll pass it on to someone else who will in turn do the same.

World Book Night represents the most ambitious and far-reaching celebration of adult books and reading ever attempted in the UK and Ireland.

The book give-away will comprise 40,000 copies of each of the 25 carefully selected titles, to be given away by 20,000 ‘givers’, who will each distribute 48 copies of their chosen title to whomever they choose on World Book Night. The remaining books will be distributed by World Book Night itself in places that might otherwise be difficult to reach, such as prisons and hospitals.

The twenty-five titles were selected by a wide-ranging editorial committee, chaired by James Naughtie.

Humshaugh Village Shop is through to the national finals of the Countryside Alliance Awards. We’ve won the regional award for best Village Shop/Post Office and now go through to a prestigious ceremony at the House of Lords on Wednesday March 30th. The North East Head Judge Richard Dodd said “Rather than be victims of the recent Post Office closures and lose their branch, this village swung in to action, raised £40,000 in grants and donations and assembled a team of 40 volunteers. In November 2009 Humshaugh Community Ventures Limited started trading. This community leads the way in what can be done with hard work and determination. They even took over the running of the local pub until a buyer could be found because they refused to see it close. This is real people power; a community knowing what is best for it and fighting its corner. I genuinely believe this is the best village shop in the country. Don’t mess with Humshaugh!” 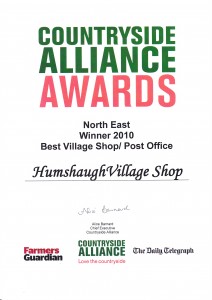 Amazing stuff! Our rivals for the regional award were David Carr’s Shop at Longframlington, which received a highly commended award, and Allendale Co-op. Click here to see all the regional winners on the Countryside Alliance’s website. Congratulations to everyone who’s been involved – it’s something to be thoroughly proud of.

There’s no such thing as bag publicity (sorry). After The Journal ran a big page lead about our Humshaugh shopping bag exploits (Saturday February 5th 2011), The Sue Sweeney Show on BBC Radio Newcastle interviewed Steve Robins on the phone. The newspaper article, minus its photos, is here on the Journal’s website. You can listen to the interview by clicking here: Steve Bag Shots BBC Radio Newcastle 20110205 128 and then on the same link on the next page.

Click here to see our brilliant new bag gallery. Your photos of your shopping bag from our shop.

The hunt is on for the most interesting, exotic, bizarre or downright silly photo of a Humshaugh Village Shop bag. The stylish jute holdalls, which have been available since October for a modest £3.99, are rumoured to have travelled all over the world. But so far the only photographic evidence we have is from the Jacots. Their picture was snapped on the beach at Puerto de la Cruz on Fuerteventura in the Canaries. Even the kitchen sink got in on the shot along with other items of flotsam and jetsam. In fact, if it wasn’t for the sunshine, it could easily be Tynemouth. 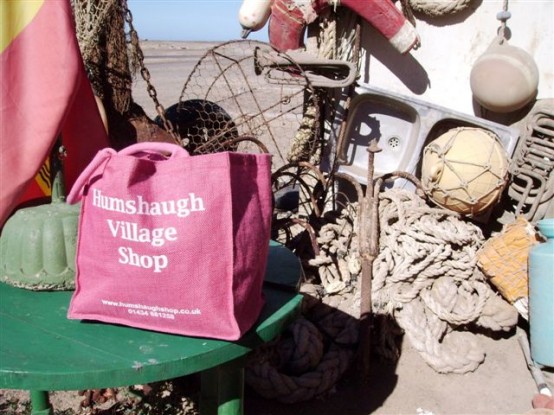 We’re expecting a series of pictures from various residents who are sweltering in Australia and New Zealand at the moment but distance isn’t everything. We’re hoping for a big collection of witty pics from wherever you happen to be showing off the proud slogan “my bag … our shop.” There’ll be a display of them in the shop and a gallery on this website so get snapping. Anyone going to Bagshot?

Your shop has been shortlisted for two prestigious awards. Humshaugh Community Ventures Ltd is in the final three of the community section of the Pride in Tynedale Awards, organised by the Hexham Courant. The other finalists are the Hearth Arts Centre at Horsley and Prudhoe Gardeners’ Association.  Last year our shop was runner up in the retail section – just a week after we’d taken over. This year’s awards ceremony on December 3rd was postponed because of the snow. We don’t yet have a new date but it will be in March.

We’re also in the regional final of the Countryside Alliance Awards 2010. Our rivals in the Village Shop/Post Office category are Allendale Co-op and David Carr of Longframlington. Regional winners will be announced in February and, if we’re successful, we’ll go through to the national awards. The winners will be revealed in March in the House of Lords.

The 70 plus people who came to the AGM in the Village Hall at the end of October were able to enjoy the première of “Humshaugh Village Shop – The DVD”.  The film, which lasts nearly 20 minutes, documents the two year battle to save and then renovate the store following the decision to close the post office counter. The video was produced by Steve Robins who runs the Working Wonders TV production company in the village. Steve filmed developments at the shop from 2008 onwards and then scripted, voiced  and edited the DVD. Copies are now on sale in the shop for just £5.99. The disc also includes the 5 minute video that Steve made to help persuade funders to support the takeover of the shop.

And if you want something to take your DVDs away in then why not buy one of the stylish Humshaugh Village Shop shopping bags – available now for just £3.99. On one side is the name of the shop and on the other the proud slogan “my bag … our shop.” People who signed up as members of Humshaugh Community Ventures Limited each got a free one and already there’s a photographic race on to see who can capture their bag in the most exotic, weird or far off location. Quite a few lucky Humshaugh people are heading to New Zealand with their bags this winter but distance isn’t everything. We look forward to seeing the results.