AMAZING NEWS! Humshaugh Village Shop’s team of volunteers has been honoured with the Queen’s Award for Voluntary Service for 2016. It’s the highest award in the UK for the voluntary sector and is equivalent to an MBE. The award was announced on June 2nd and it was presented by the Duchess of Northumberland to representatives of the 40 strong team at a garden party in Alnwick Garden on June 15th. Congratulations to the entire team and thanks to everyone who has supported us. More here.

A volunteer-run, community shop serving Humshaugh and the surrounding villages since November 1st 2009.

The story of the shop…

Humshaugh Village Shop in the North Tyne Valley of Northumberland is run by the community for the community. It’s a newsagents and general store which was saved from shut-down when the previous owners decided to retire following the controversial closure of the in-store Post Office.

The shop sells morning papers and magazines, confectionery and groceries including fresh vegetables, milk and bread. It had a major refit in May-June 2010 which has transformed it into a bright and cheerful self-service store. There are improved facilities including extra fridge and freezer capacity. The shop will also be stocking more local produce and encouraging keen gardeners to grow a crop for the shop.

Humshaugh Shop is run by the nine volunteer directors of Humshaugh Community Ventures Limited and an army of enthusiastic villagers, who work behind the counter, collect supplies or help in whatever way they can.

The shop has won the 2010 Pride in Tynedale main award as well as the award for the community category. It was also the proud winner of the Countryside Alliance’s Best North East Village Shop/Post Office Award. In 2009 the shop was commended in the retail category of the Pride in Tynedale Awards.

Then in 2013 the Prime Minister’s office announced that we’d won a Big Society Award.

For more information on this amazing story of community spirit winning through read our “Background Story” . 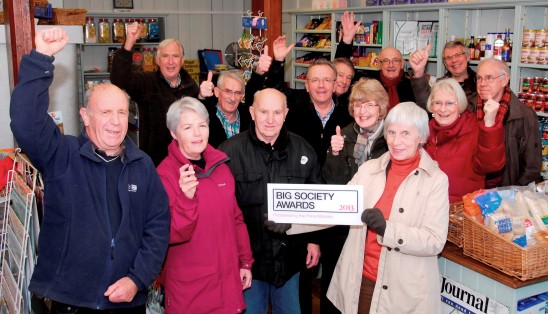