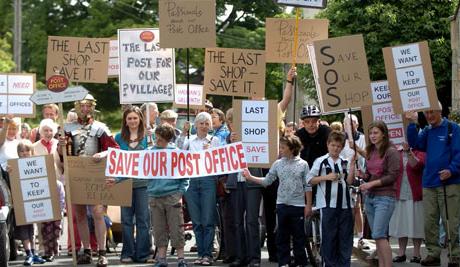 Humshaugh Village Shop has been run by the community since November 1st 2009 but the campaign to save it began back in July 2008.

The shop used to have a Post Office counter run by sub-postmaster Rob Gray. His wife Pat looked after the shop side of the operation. They were planning to sell up and retire but then Post Office Limited threw a spanner in the works by announcing that it planned to close Humshaugh’s Post Office as part of its nationwide review. Despite a fiercely fought protest campaign, a spectacular demonstration by villagers and a great deal of publicity in newspapers and on TV and radio the decision wasn’t reversed. In January 2009 the Post Office counter closed and it was replaced a van which parks outside the Village Hall from 12.45-2.25 every weekday. Pat and Rob then had to try to sell the business without the benefit of a Post Office income.

Before the campaign to save the shop could get under way it was decided to canvass the views of villagers. A questionnaire was delivered to homes in the Humshaugh area asking about opening hours, products and services and whether there would be support for a community run shop. At the end of March 2009 a public meeting was called by the Parish Council and villagers gave their unanimous support for a “Save Our Shop” campaign.

When no buyers came forward the committee of volunteers formed a company limited by guarantee called Humshaugh Community Ventures Limited and campaigned for money from various funding organisations. They even produced a fundraising video to persuade potential funders to support the project.

The campaign successfully raised £35,000 – £22,500 from NULEADER, £7,500 from the Big Lottery Fund’s Awards for All programme and £5,000 from the Sustainable Development Fund. In addition the Evans Trust gave £1,500 and generous donations from villagers raised another £2,500. After another public meeting to tell villagers the good news, around 40 people volunteered to help out. And so on Sunday November 1st 2009 Humshaugh Village Shop was opened by volunteers for the first time.

In May and June of 2010 the shop moved to the back room of The Crown Inn for three and a half weeks while the store underwent a major re-fit. It reopened in early June and was officially opened on August 7th by Graham Wylie, the multi-millionaire businessman  who, until November 2010, lived at Chesters. The whole amazing story is told in “Humshaugh Village Shop – the DVD” available for just £5.99 in the shop. The film, which lasts for nearly 20 minutes, documents the two year battle to produce the award winning shop you see today. The disc also includes the 5 minute fundraising video which features on this website.